These Cabbage Leaves Stuffed with Meat and Rice  are called "golubtsy" in my country and constitute one of the favorite dishes of the Russian-speaking people. Tim, a reader from Germany, tells me that a similar dish exists there, and I have also seen something very similar at a Chinese buffet. However, I strongly believe that my recipe is one of the most delicious out there. Just compare the photo of how they look when I make them to a picture I posted yesterday from one of the most popular Russian-language website.
And these are my golubtsy: 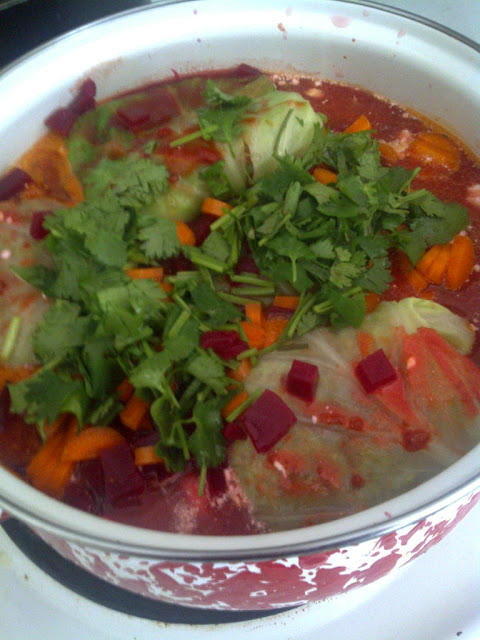 Since not everybody is interested in cooking and there are quite a few photos that accompany this recipe, I will fold the recipe itself under the jump break. Otherwise, it will occupy the entire homepage.


What you will need:

For the cabbage pockets:
- 1 lb of ground meat
- a big head of cabbage
- a medium tomato
- a medium onion
- 5 cloves of garlic
- 1/2 bunch of cilantro
- a cup of rice
- some salt
For the sauce:
You can either just use your favorite tomato sauce and avoid the aggravation, or make my favorite tomato sauce. To make it you will need:
- a small can of tomato paste. I use Hunt's because it's the best, in my opinion
- 2 carrots
- a can of canned beets
- carrot juice
- 1/2 bunch of cilantro
- a cup of sour cream 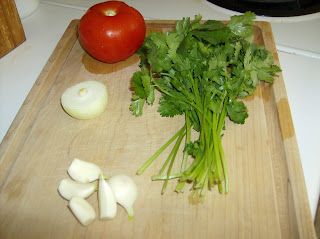 Put them all into a food processor and blend until all chunks disappear.

2. Add the resulting mix to the ground meat. For ground meat, I usually combine ground pork and ground beef for most of my recipes. Then add salt to taste and mix everything up. This is how the whole thing will look as a result. 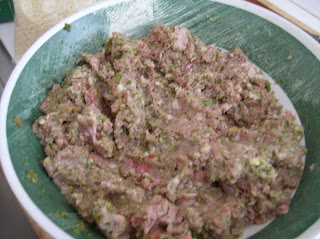 3. Boil some rice until it's just al dente (make sure you don't overcook it!) and add it to the filling. 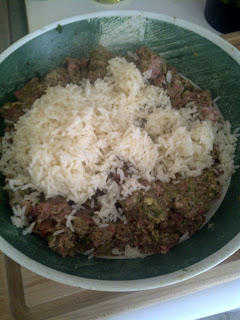 It is very important to make sure that the rice is quite firm and not mushy when you add it to the filling. Mix everything up, and your filling is ready.

4. Take a big head of cabbage and carefully remove the 8 or 9 of the biggest outer leaves. Try to remove them without tearing them. Don't be afraid, though. I'm the clumsiest person on the planet, and I managed to do it without spoiling a single leaf. It helps to make a cut at the top of the leaf where you see this really thick part joining the leaf to the cabbage. 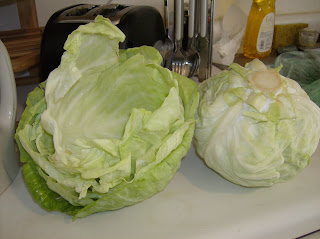 5. Boil some water in a pan and plunge the cabbage leaves into the boiling water one by one. The goal is to make the leaves soft enough to be folded but not mushy. 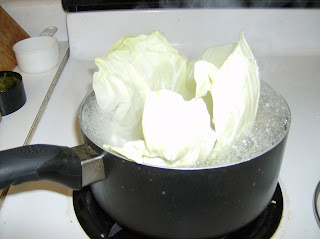 Five to seven seconds in the boiling water are usually enough.

6. After you get the cabbage leaf out of the boiling water and let it cool down some, you will need to cut off the thickest part of the leaf. I draw a very uneven red circle around it in the next picture. I'm insanely proud of my technological sophistication right now. 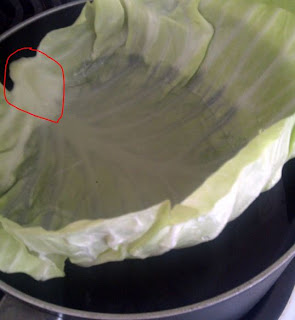 7. Put some filling into the cabbage leaf and fold it like a little envelope. 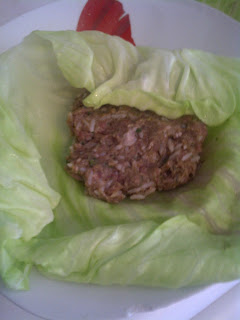 8. Then, place all the folded stuffing-filled cabbage leaves into a pan. This is what the whole thing will look like: 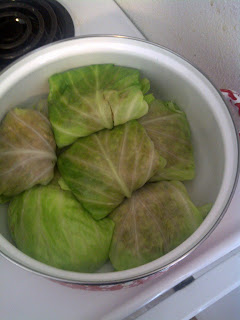 9. As I said, now you can either pour your favorite tomato sauce on top and let the whole thing simmer on a very slow fire for about an hour, or you can make the sauce the way I do it. Mix a cup of beet juice (from a can of canned beets), a cup of carrot juice, a small can of tomato paste, and a cup of sour-cream. Pour it on top of the cabbage pockets. Add some diced carrots and beets. Put some fresh herbs (cilantro is what I prefer) into the pan, too. Let everything simmer for 1 hour. And you are done. 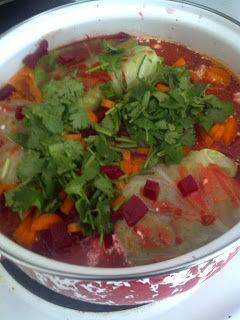 Yum!
There is a similar dish in my country but with pickled cabbage leaves. Lots of bacon and sausages are placed around the wraps and simmer with them for a few hours. (Also, several ingredients are different, but the beef and rice and onions do go in the stuffing).

That looks very, very good. Love the pictures of the cooking process as well!

You know what, this looks so good I'm going to make it at home. One question: does it matter how tightly the cabbage leaves are folded over the meat+rice? I'm having visions of rice and meat escaping the pouches and floating to the surface.

I don't tie them in or anything, and they never unwrap. The trick is not to put in too much sauce and make sure that it is quite thick.

Looks yummy. There's also a variant of this in Egyptian cuisine (with a less exciting sauce and with beef/lamb).

I'd do it with lamb in a flash, if only I could find it.

Golubtsy this my most favourite dish. I do them very often and I do as well as you.
But there are two secrets which facilitate preparation process.
1. What is easier to separate leaves from a head of cabbage and not to tear them, it is necessary to lower a head of cabbage on two minutes in a pan with boiling water. They become more elastic and won't break.
2. Before filling in with sauce and to extinguish, I fry them on one minute from each party on a frying pan, very appetizing ruddy color turns out.

Yes, frying them on both sides makes them a lot better. But I'm trying to avoid frying for health reasons.

I know this as a Serbian version, from sauerkraut leaves (pickled cabbage) and with filling made with onions, rice and ground meat. No tomato sauce is used for cooking though, just meat or vegetable broth. It's called "sarma". And in Greece you get "dolmadakia" (sp?), which is the same thing, except that they use vine leaves instead of cabbage.

I'm very glad that this recipe provoked such a fascinating discussion. I'm definitely learning a lot!

I make the same kind of rolls using ground Italian sausage for the filling and brown rice. I use canned tomato sauce, I'm lazy. One of these days I'm going to wrap the filling in purple cabbage leaves, just to be different. I like the cilantro and beet additions too.