There has been a veritable flurry of very long novels about the Civil War published by the leading Spanish writers in the past couple of years. Almudena Grandes is even planning an entire series of such novels. She has already published two, El corazón helado (very good) and Inés y la alegría (a review will appear on this blog shortly). Also of note is Antonio Muñoz Molina's La noche de los tiempos, which is as long as it is enjoyable.
The reason why so many authors in Spain still write about the Civil War at great length is that the trauma of the war was never fully healed. Decades of a fascist dictatorship followed the defeat of the Republicans in the war. After Franco's death, one of the characteristics of Spain's transition to democracy was (as usually happens with countries that emerge from long and repressive authoritarian regimes) to try to forget the war. No persecution and punishment of war criminals took place. People who fought against each other, the victims and the executioners were expected to start living peacefully side by side pretending that no Civil War and no dictatorship had ever taken place. This approach was obviously doomed to failure. Spanish writers today are trying to heal the trauma of the Civil War by talking about all of its aspects at length. This is something that Spanish society definitely needs. Great novels come out as a result, which is an added bonus. 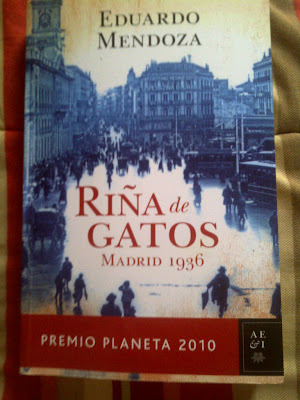 Eduardo Mendoza decided to participate in this trend with his recent novel Riña de gatos. Madrid 1936. Mendoza's approach to exorcising the ghosts of the Civil War is different from that of many other writers. Riña de gatos turns the tragic months preceding the beginning of the war in the summer of 1936 into a burlesque. Laughter has the power to heal trauma and bridge even the most profound differences. Mendoza brings to the pages of his new novel José Antonio Primo de Rivera (the leader of the Spanish fascists), generals Francisco Franco and Queipo de Llano  (who are plotting a  military uprising against the Republic, an uprising we all know will be successful and cause untold horrors to the country), Niceto Alcalá Zamora (the first president of the Second Spanish Republic) and Manuel Azaña (who will become the last president of the Republic.) All of these historic figures are placed in situations that make them look homey, non-threatening and slightly ridiculous.
The plot of the novel revolves around Anthony Whitelands, a British art critic, who comes to Spain to authenticate a painting that was supposedly created by Velázquez. As the hapless Brit boozes and whores his way through the Madrid of the spring of 1936, his activities attract the attention of competing political factions that would like to get their hands on the painting. A genuine Velázquez could pay for a lot of weapons and help the group that manages to lay its hands on the painting win the approaching war. Soon, Anthony Whitelands finds himself being torn between offers of friendship from the charming fascist José Antonio Primo de Rivera, sexual advances of sex-crazed countesses, demands of an underage prostitute, manipulations of British and German spies and threats from a Soviet conspirator named Kolia.
When I first started reading the novel, I opened it in a suitably somber mood that I believed was appropriate when reading about events as painful as those of the pre-war months in Spain. By the end of the novel, however, I was beating my head against the desk in laughter. I've read several reviews of Riña de gatos. Madrid 1936 and realized that many of the readers didn't manage to escape from the weight of gravitas that usually accompanies the discussions of the Spanish Civil War. If one were to let go completely of the doom and gloom attitude to the war, one would realize that Mendoza's novel is extremely funny. This writer is known for subverting the readers' expectations and this is exactly what he does in his new novel.
Posted by Clarissa at 12:45 PM