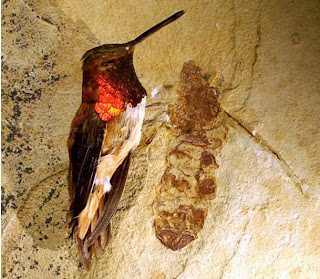 As a life-long insectophobe, I am always especially attentive to news involving insects. This is why I was terrified and traumatized to discover that gigantic winged ants of the size of hummingbirds existed on our planet 50 million years ago:

A winged ant queen fossilized in 49.5-million-year-old Wyoming rock ranks as the first body of a giant ant from the Western Hemisphere, says paleoentomologist Bruce Archibald of Simon Fraser University in Burnaby, British Columbia.The new species, Titanomyrma lubei, is related to giant ants previously found in German fossils. These long-distance relatives bolster the notion that the climate of the time had hot blips that allowed warmth-loving giant insects to spread from continent to continent, Archibald and a U.S.-Canada team propose online May 4 in the Proceedings of the Royal Society B. An ancient ant wing from Tennessee had hinted that big ants lived in North America during this time, says Torsten Wappler of the University of Bonn in Germany.

Ants are extremely strong and especially well-organized. In my opinion, only their small size prevented these nasty creatures from taking over the planet. It's good news that they didn't grow any bigger than this!
Posted by Clarissa at 8:32 PM

In Israel we have giant flying cockroaches. I am almost sure the ants, at least, were prettier.

RE insects: I loved Amanda's (?) expression at Pandagon: "From far away it may look like a pretty butterfly, but look closer and you'll discover an ugly insect". (About some social issue).

I've never eaten lobsters or shrimp since their numerous legs make them resemble insects too.

Interesting why many people are disgusted by insects. Snakes, makes sense. But insects were (sometimes extremely important) resource of food for a very long time. I would let evolutionary biologists, who claim 99.99% of preferences are biological, to figure that out.

On the bright side, We finally found a reason why people believe the earth is only 6000 years old. They are afraid of insects too ;)

I notice the article didn't touch upon the oxygen content of the atmosphere in the places where the largest ants are currently found. 49.5 million years ago (and for a long time before and after), the high oxygen content (now it's about twenty percent) produced huge animals and insects.

Tropical forests possess some of the greatest oxygen contents in the world--to me, that would be a bigger indicator of large ant species than climate alone.

"On the bright side, We finally found a reason why people believe the earth is only 6000 years old."