Movies I Actually Love, Part I

I have mentioned time and again how much I dislike cinema. It pretends to be art but almost always fails to live up to the claim. As entertainment, it is too authoritarian for my taste. There are, however, several films that I love and consider to be as close to works of art as any movies can be. Here they are in no particular order.

1. Before Almodovar sold himself out to Hollywood and started churning out idiotic tear-jerkers of the Hable con ella and Todo sobre mi madre variety, he was actually a great movie-maker. What Have I Done to Deserve This? (1984) is, in my opinion, his greatest work. Every frame, every move of every actor, every single word are absolutely amazing. I really wish we could have the early Almodovar back, but obviously that's not going to happen.

2. Before Javier Bardem sold himself out to Hollywood and became the new favorite lap dog of the egregiously untalented Penelope Cruz, he was one of the most gifted actors of his generation. Mondays in the Sun (2002) is so professionally and beautifully made and Bardem is so incredibly good in it that I can't stop watching this film. I'm now on my second DVD because I watched the first one so many times that it became useless. 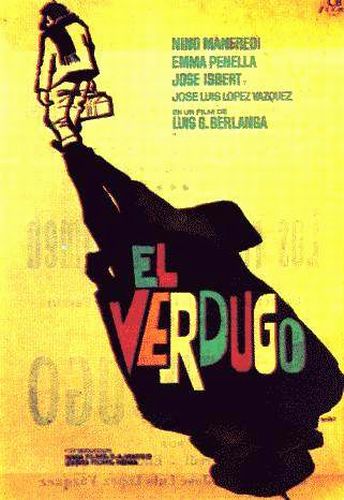 3. El verdugo (1963) or Executioner by Luis Garcia Berlanga is a classic of Spanish cinema. It is a very quiet, low-key portrayal of how easily and casually one can slip into performing acts of atrocity in the most mundane way possible. In many ways, this film is very symbolic of what the entire XXth century has been like.

4. In case you think I only like Spanish-language movies, you are wrong. Crash (1996) by David Cronenberg (not to be confused with a 2004 film by the same name) is a brilliant movie. It has been criticized by prissy viewers and film critics. Nevertheless, it is one of the most insightful cinematic analyses of sexuality that I have ever seen. The movie's tone is subdued to the point of being flat which is precisely what makes it standout against the background of regular Hollywood concoctions that attempt to deal with sex. Hollywood film-makers and audiences are so terrified of sexuality that they talk, cry, babble and prattle it to death.

5. As I said many times before, nobody knew how to make movies like the Russians. It's very difficult to choose one film that I consider to be the best among the incredible production of the Soviet filmmakers. I guess, Unfinished Piece for the Player Piano (1978) has got to be the winner from the Soviet epoch. The film is based on a play by Anton Chekhov. Chekhov is obviously a genius and making a film based on his work is a huge challenge. Nikita Mikhalkov, the director, used to be so good that he created a version of Chekhov which is better than the original. This is also the only film where Mikhalkov delivers a great performance as an actor. (His acting talents are extremely limited but here he was really good.) Forget about the plot of this movie, just observe how beautifully the director creates the ambiance. The actors are phenomenal, as usual in Soviet movies.

6. From the post-Soviet era, I recommend Heart of a Dog (1988). This movie is based on a novel by one of the greatest Russian writers of the XXth century, Mikhail Bulgakov. Once again, as amazing as the novel is, the film manages to be almost as good. Unlike the previous movie I listed here, I don't think this one exists with English subtitles. Which is a shame because non-Russian movie-lovers are losing out on something huge here.
(To be continued. . .)
Posted by Clarissa at 3:01 AM

ohhh if you like "¿Qué he hecho yo para merecer esto?" (What Have I Done to Deserve This?)by Almodovar that much you sould check (if you haven't yet)"Mujeres al borde de un ataque de nervios" (or "Women at the Edge of a Panic Attack") which I like even more than the first one. And about Berlanga, try "Bienvenido Mr. Marshall", something like "Welcome, Mr. Marshall". And if you like the pre-Penélope Bardem, there is a big spanish film he made, "Mar Adentro" (ermh... "Deep Sea"?) you might enjoy, but this is not a real recomendation: I never liked Bardem and I didn't like that film.

A great movie depicting the nightmare of East Germany, and one entrepreneurial individual's love of liberty, is Night Crossing.